Hello. I’m Rich Keeble writing in the third person as if someone else was doing it. 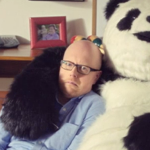 Rich Keeble is an actor, musician, presenter, and voice artist. He studied acoustics and wanted to be a rock star, singing and playing guitar in one band, playing keyboards in another, and drums in two more. He did tour a bit, release some music and even play live on the proper radio a few times, but in the end it didn’t work out and he turned to acting and comedy. Now he’s doing music again. Anyway, let’s split this up a bit: 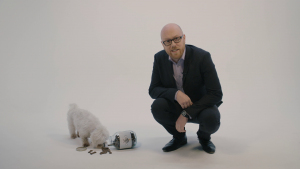 Rich is occasionally recognised and shouted at in pubs or on the street from having starred in a number of high profile TV commercials. Since 2015 he has been seen starring in the Topcashback adverts, first sitting on the hippo, and as of 2017, doing a lot of walking.  In 2014 he starred in the first of a series of comic adverts for McDonald’s and the year before was in a recurring ident on the BBC (the one with the panda) where he worked with director Victoria Pile for the first time. He did pop up in the Lidl Christmas advert in 2015, although they cut most of what he did.

Rich also had a significant role in a semi-scripted teaser for E4, The Lovebomb, directed by Made in Chelsea’s John Pereira, and appeared in a pilot called Losing the Plot  that also starred Andrew Harwood Mills and Ian Cullen (Z Cars). He played the lead in another sitcom

pilot called Rules of Life which was shopped around by by Catherine Bailey Productions (Life of Riley, Quick Cuts) before being re-edited in a web series.

Online
Rich co-writes his own semi-scripted comedy online show Rich Keeble Vanity Project (see video page) which actually won a few awards and got nominated for a load more. Rich and the team are currently in talks with to develop it for television. He also co-wrote the award winning All in the Method web series with Luke Kaile, as well as The Kaile & Keeble/Keeble & Kaile Sketch Show. 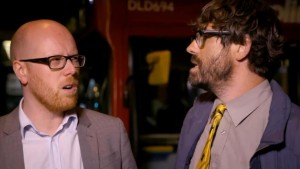 provided the voice of a radio DJ in Finding Fatimah, and shot a small role in a Michael Caine film (TBA 2018). He has also done some “serious” acting in indie features like the award-winning Eva’s Diamond, where he played a violent gangster who actually gets involved with kicking a man to death, The Addicted (retitled “Rehab” in the U.S.) where he plays a rather disinterested TV executive, and M.O.N.E.Y starring Wil Johnson, where he has a lovely chat with a lady who then shoots him in his car.

Live Theatre/Comedy
Rich has performed stand up, improv and sketch comedy as well as appearing in serious plays. He performed a sketch/stand up show at Edinburgh in 2014 with Luke Kaile (Kaile, Keeble & Kuntz), which was filmed and is currently being edited.

He was also in a play once as real life double agent Donald MacLean in A Morning with Guy Burgess at the Courtyard Theatre, London, which was featured on the BBC Review Show. He also appeared in the plays Halfway House and Criminal Audition at the Etcetera Theatre. (That last one was the play on which the eventual film was based…)

Voice work
Rich does a lot of voice work for TV & Radio adverts, video games and audio books. Big ones include the Total War: Warhammer video game and those Property Partner adverts with the people with houses for heads. To stop this site getting too unwieldy, Rich has a specialist voiceover site at richdeepvoice.co.uk

Rich used to sing and play guitar in indie-rock band Goodbye Sergeants. They actually attracted a lot of fans (in Europe and the US) thanks to Myspace (remember that?), had some proper radio play and released the single “Boy Band Kind of Way” / “I Want to Get Fired” and the Live at the Bullet Bar EP in 2007. With a change of guitarists (Rich’s schoolfriend Matt Jarman replaced Matt Haynes), the band released the An Opuscule Worthy Of A Monstrance  EP in 2009, and released a video for the song “I Used to be a Loner” which was taken from the new Three More Songs EP. However the EP never got released, and the band played their last gig in 2010.

Part of the reason for things winding down was Rich’s involvement in other musical projects. He played live keyboards for indie-rock band The Splendour on their 2008 UK summer tour in support of their album Best Way To Make Money (2008), the last performance of which was at Beachdown Festival in Brighton, which sadly no longer exists. The band went their separate ways after the tour.

In 2008 he joined the band Sergeant Buzfuz as their drummer to support their album High Slang that was released in 2009. The band played a number of gigs around the country including live session performances for BBC 6 Music – performing on both Marc Riley and Tom Robinson’s shows. He didn’t actually play on the album though. He played drums for Dr Strangely Strange during a London reunion show where Sergeant Buzfuz were supporting on 21 February 2009. Rich decided to leave the band and played his last gig with them on 21 March 2009. His replacement was Ian Button from Death in Vegas. They’re still going strong.

Rich also filled in on drums for trendy indie band Ratty Rat Rat for a gig at the Astoria 2 in 2008. Members of that band now play in Is Tropical who I think are doing quite well.

Rich has also played drums in The Pistol Gang & The Preacher on and off for a number of years. They called it a day in 2017. Other members were Sam Legassick on guitar/vocals (who is also in Rich Keeble Vanity Project) and Matt Jarman on bass (who was in Goodbye Sergeants).

We receive literally hundreds of questions daily, so here are some of the most frequently asked. Please see if your question is here before contacting us:

Is this Richard Keeble, the professor of journalism?
No. Afraid not.

Can I get a signed photo of Rich?
No, sorry. However, you could print out a photo from this site, and write ‘Best wishes, Rich Keeble’ on it yourself. No-one’ll know.

Is this Richard Keeble, the author, who is also a proffessor of journalism?
Sorry, no, and that’s not how you spell ‘professor’.

Will Rich be making any public appearances soon?
Technically, Rich appears in public most days.

I notice Rich’s Wikipedia entry claims he died in 1660, and his name is spelt differently. Why is this?
That’s a different person. An easy mistake to make though, so don’t beat yourself up.

Is Rich rich?
No.

Is Rich in any way related to John Keeble, the drummer from Spandau Ballet?
Actually, yes.*