These days I’m writing and performing songs with Rich Keeble & The More Accomplished Musicians, a garage rock band which involves my dear friends Jon and Dave. I used to play with Jon in a band called Goodbye Sergeants. This year I also collaborated on some electropop stuff with my mate Dan (Warbatron). I’ll tell you a bit more but first, here’s a little playlist of what I think is some of best stuff (comedy and not-so-comedy) of those projects I’ve just mentioned:

This playlist is also available on Spotify. 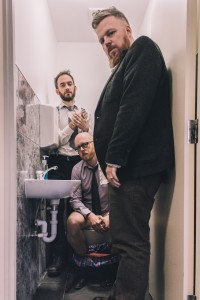 I started this band in 2016 after having not done much musically since about 2010. I decided to play guitar myself and keep it a three-piece for simplicity, and I think it works really well. We released a self-titled album and a single in 2017, an acoustic EP and a remix EP in 2017, and are planning to record the second album in January 2019.  Everything is on Spotify if that’s your music portal of choice, or Bandcamp, iTunes or indeed Youtube and everywhere else you’d expect.

Any live dates will be posted on Songkick so please do check that out if you’d like to come to a show.

I would also like to bring your attention to the music video for the single mentioned above, starring my actor friend Ben Green, who you might recognise: 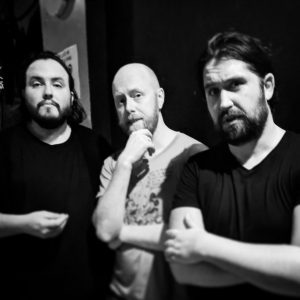 In 2018 I joined my mate Sam’s band CELLS as their bass player. They released some singles and an EP last year, and an album this year which I played on (except the last track, which has the previous bassist, Ben, on it).

You can check out the album on Spotify or Bandcamp.

You probably recognise Sam as my producer/manager/c**t from Rich Keeble Vanity Project.

In 2018 I released this double A-side electro-pop single with electronic musician Warbatron.
Both these tracks are included in that playlist up the top, but isn’t that artwork just so ICONIC. My friends say this is the best thing I’ve ever done.

This is also on Spotify but you can also BUY IT ON CASSETTE from Bandcamp!!!

I used to sing and play guitar in this band with Jon Shortt who now plays with me in RK & The MAMs. That photo is the original line up with Jon Shortt, Matt Haynes and Julian Trill. Me in the hat (Taken in 2007).

I just released a compilation pulling together a load of previously available and rare/unreleased stuff from that band. A couple of my faves are in that “Hits” playlist but the full album is on Spotify and Bandcamp. 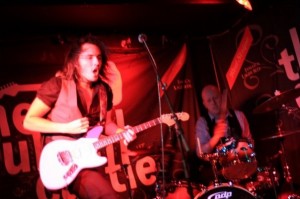 I also used to play drums in this band until we knocked it on the head last year. Other members were Sam Legassick on guitar/vocals (yes, him again) and Matt Jarman on bass (who replaced the other Matt in Goodbye Sergeants).

I don’t really think the Pistol Gang recordings did us justice so here’s a gig we did which I think is pretty cool. (Me on drums)

I played live keyboards for this indie-rock band on their 2008 UK summer tour in support of their album Best Way To Make Money (2008), the last performance of which was at Beachdown Festival in Brighton, which sadly no longer exists. The band went their separate ways after the tour. Technically I was actually a full member, but never played on any recordings.

In 2008 I joined this anti-folk band as their drummer to support their album High Slang that was released in 2009. The band played a number of gigs around the country including live session performances for BBC 6 Music – performing on both Marc Riley and Tom Robinson’s shows. I didn’t actually play on the album though. I played drums for folk veterans Dr Strangely Strange (of whom Gary Moore was a previous member) during a London reunion show where Sergeant Buzfuz were supporting on 21 February 2009. I decided to leave the band and played my last gig with them on 21 March 2009. My replacement was Ian Button from Death in Vegas. They’re still going strong.

I’m about to release some electronic noise stuff under the name Rysiunio, and have just started recording a heavy, noise/punk album under the name I Invented Piss, where I’m playing weird/downtuned guitar and drums. I hope to get both of those out in 2019.

I also filled in on drums for trendy indie band Ratty Rat Rat for a gig at the Astoria 2 in 2008. Members of that band now play in Is Tropical who I think are doing quite well.