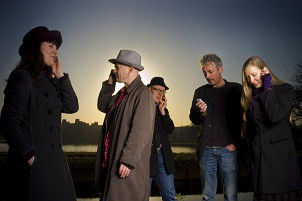 In 2008 I joined Sergeant Buzfuz, a band often labelled as “anti-folk”, as their drummer. We toured in support of the album High Slang which was had just been finished (so I didn’t play on it) and was released in 2009. We played a number of gigs around the country including live session for BBC 6 Music – performing on both Marc Riley and Tom Robinson’s shows.

I had a lot of fun playing those songs but ultimately I decided to leave the band and played my last gig with them on 21 March 2009. My replacement was Ian Button from Death in Vegas. I didn’t play on any recordings.

They’re still going strong, and I still speak to Joe Murphy (frontman/songwriter of the band/label runner) and Kate Arnold, who used to play dulcimer and violin in the band. Interestingly, we used to rehearse at Jon Clayton’s studio, with whom I now record with.

You can check the band out on Spotify.