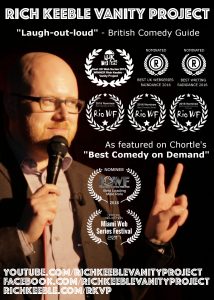 “Laugh-out-loud” – British Comedy Guide
“Incredibly hilarious” – Snobby Robot
“A bit like Alan Partridge. If Alan Partridge was bald, wore glasses and nobody knew who he was. A laugh-out-loud comedy that has really come into its own” – VODzilla
“Always on the borderline between awfully funny and delightfully incorrect” – Web Series Mag
As featured on Chortle’s “Best Comedy on Demand”

Meet Rich Keeble – a real-life struggling comedy actor that feels that his way to success is to have his own show. This is the show – about the show.
This new, awkward, hilarious improvised comedy series is about Rich Keeble’s struggles to get a successful second series. In a mockumentary style, we see him battle his bully of a producer and fail after every attempt to try and be Britain’s next top comedy talent.
No matter what life throws at him, he’s determined to be a successful comedy actor – it’s just a matter of time, and talent

This is basically an improvised mockumentary style show, shot by DOP Edd Wright (who’s shot Land Girls, Death in Paradise, Casualty) and 2nd cameraman Tom Dennis. It’s co-directed by Edd, Sam LeGassick and I. Series 2 follows my character as he tries to raise his profile after the dire performance of Series 1. It features some great guest spots from Jade Colucci (Eastenders) and EJ Martin (Casualty). Series 2 is here:


Series 1 was deliberately a bit weird and anti-comedy, but I am really pleased with it. The green screen is deliberately not hung properly, my mic wires are hanging out and it’s supposed to look a bit amateurish. I’ve deliberately tried to give the episodes “click bait” titles. Doesn’t seem to have worked so far… (the accompanying podcast, Rich Keeble Vanity Podcast, is here!)