Ok, so thanks to all who showed up/hung around to see us play the bandstand in Sutton! We had a really great time despite our concerns (they also told us to ‘tone it down’ a bit just before we went on, which we basically ignored), and got a much better reaction than we were expecting!

Now, the band have no more shows booked for a while, but I thought you might be interested that I am trading in my charismatic/arrogant/annoying frontman persona to sit behind the drums again for a gig tonight at the 12 Bar Club with Sergeant Buzfuz. Should be on about 9.15, and the set will be dominated by new songs from the band’s as yet unreleased 4th album… tracks from which you can listen to on their myspace (i’m not playing on them before you ask)

here’s the info from the mailout… Maybe see you there!

10 00 MICHAEL EDEN
Looped ethereal hymns reverberating from a melting star. Sheffield’s Michael Eden favours leaving the stage while heavy-breathing to the audience through a telephone.
www.myspace.com/michaeleden

9 15 SERGEANT BUZFUZ
“like Nick Cave on the dole” (Sounds XP)
“REM would kill, hopefully each other, for songs like these” (Unpeeled)
“uneasy listening” (Flux)
www.myspace.com/sergeantbuzfuz

8 30 THE BOYCOTT COCA-COLA EXPERIENCE
Nursery rhymes slowed down to funereal pace. Like a narcotic English folk tale version of Patrick McCabe’s ‘The Butcher Boy’ as soundtracked by Syd Barrett and Jake Thackeray.
www.myspace.com/bcce 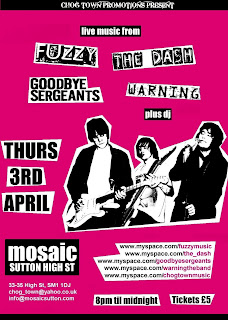