I reckon this is pretty cool – a trailer for the game Rise of Kingdoms with me as Caesar! Also nice to do some shouting.

Things are looking very exciting for Criminal Audition it would appear: the film is premiering at Frightfest on Saturday, has been getting some nice reviews and even featured on some “must see” lists.

Sight & Sound have featured us as one of “10 human horror highlights”, and Entertainment Focus include us in their “10 hidden gems” list. Also how can I not mention this review by Nerdspan who say: “Most of this feels centred on the hapless William, who clearly becomes more out of his depth as the night progresses. Luckily, Rich Keeble does a great job with this and holds it all together as a focal point, while the world around William falls apart. Alongside him, Luke Kaile’s Ryan is pretty much the moral centre, compared to the rest, and is a nice foil for William. This pair are great throughout and make a very likable double act“. Isn’t that lovely? Makes a nice change from being trolled on Twitter about Topcashback!

Tickets to see the film on Saturday at the Prince Charles Theatre, Leicester Square are available here. Sadly I can’t be there this time but this is a great film despite me being in it and I’d love you to see it. If you haven’t seen the trailer check it out here.

Last weekend I had a lot of fun at the University of Hertfordshire/Hertfordshire Law School roleplaying the defendant in a series of mock trials for the The National Criminal Advocacy Competition. We had 4 trials on the Saturday, each with a prosecution and defence counsel team (obviously I guess) who were assessed (by real judges) on their actual case and performance etc but also how they dealt with witnesses (including me). The final was on Sunday afternoon with the same case, but with us playing our characters differently to spice things up. Met some lovely people, including the ultimate winners Annie Lenton and Jack Moore of Nottingham Law School – in the photo above – who defended me in the final and got recognition for dealing with my particularly hard to handle character who at one point started shouting from the dock! Some cool photos by Pete Stevens/Creative Empathy below:

Dr Keeble in the House

I’ve just done a couple of days on Doctors for a guest lead in an upcoming episode. Had a really great time playing a fun character. Can’t wait for it to TX in December!

Nice little write up in August’s Edge magazine on Astrologaster – a game I voiced the character of Robert Devereux in which came out in May. A clip is in my video game reel on the video page!

The official Criminal Audition trailer was released today. Looks pretty good doesn’t it! And I’m in it loads! Excited that it’s been selected to screen at Frightfest in its 20th year too!

Very excited about this one – first vinyl release on the label! Limited edition, clear lathe cut 7 inch of RKMAMs’ My Doppelgänger single, with brand new remix on Side B. Check it out!

Here’s the trailer for a short I shot in February. Enjoyed doing a bit of drama! Should be going into festivals soon I understand!

I was very happy to hear that Joe Lycett’s Got Your Back was commissioned for a full series, because I worked on the non-TX pilot back in March 2018! Tommy Forbes – a director I’ve worked with on many occasions now – asked me to be in a hidden camera VT, so I played a Satanist called Phil who had supposedly booked a room with his husband…. somewhere…. and they planned on sacrificing their cat, doing a lot of chanting, and asked some very awkward questions of the poor reception staff. It was all rather fun, and Joe is lovely.

Check this baby out! Looks who’s on a film poster! Shot at the tail end of 2017, this darkly comic/crime thriller premiered last week and boy it turned out good! Packed Prince Charles cinema in Leicester Square, great reaction, great vibes. My wife managed to give birth to our second daughter early so I could go (the due date was actually the date of the premiere), and even though I’m in the film A LOT, I don’t think I ruined it so I’m very happy. Hopefully you can see it soon! x

Sometimes everything just bloody happens at once. My 2 episodes of Warren went out either side of my episode of Porters on Dave. Sharing scenes with Laura Checkley, Siobhan McSweeney, Susie Wokoma and Danny Mays… I mean just look at the episode cast list for goodness’ sake! I have to have a sit down every time I think about it.

Check it out on Dave catchup right now!

I was absolutely delighted to play 3 different characters in Martin Clunes’ BBC1 sitcom, Warren. I played the radio presenter who top and tailed episode 4, and then I played both the unhelpful shop assistant and the irritable taxi operator on the phone in episode 6! You can still check out those episodes on iPlayer.

Drumming up… some money

Here’s me actually earning some money by playing the drums. Probably more than I have in 15 year or so years of playing bands! This was a fun shoot over in Kiev, Ukraine, for Ricardo.ch – it’s for Swiss TV so this version is in German!

Very pleased to have been involved with 2 games in The Telegraph’s 50 best games of 2018! Strange Brigade, in which I played Frank Fairburne, is in there along with Vermintide 2 – I voiced the infamous Blightreaper in the Shadows over Bögenhafen  DLC. Footage of both of these are in my video game footage reel on the videos page!

I was very excited to see that Inside No.9 was featured at No.1 of the list of 25 best TV episodes of 2018 in this Guardian article. In case you weren’t aware, I provided the voice of the Radio DJ near the beginning of the show, and a spooky voice later on after it’s really got going. It was one of the few times when I actually watched a show live, and I’m very glad I did!

That post title will make sense when you watch this video.

Through the Christmas Keyhole 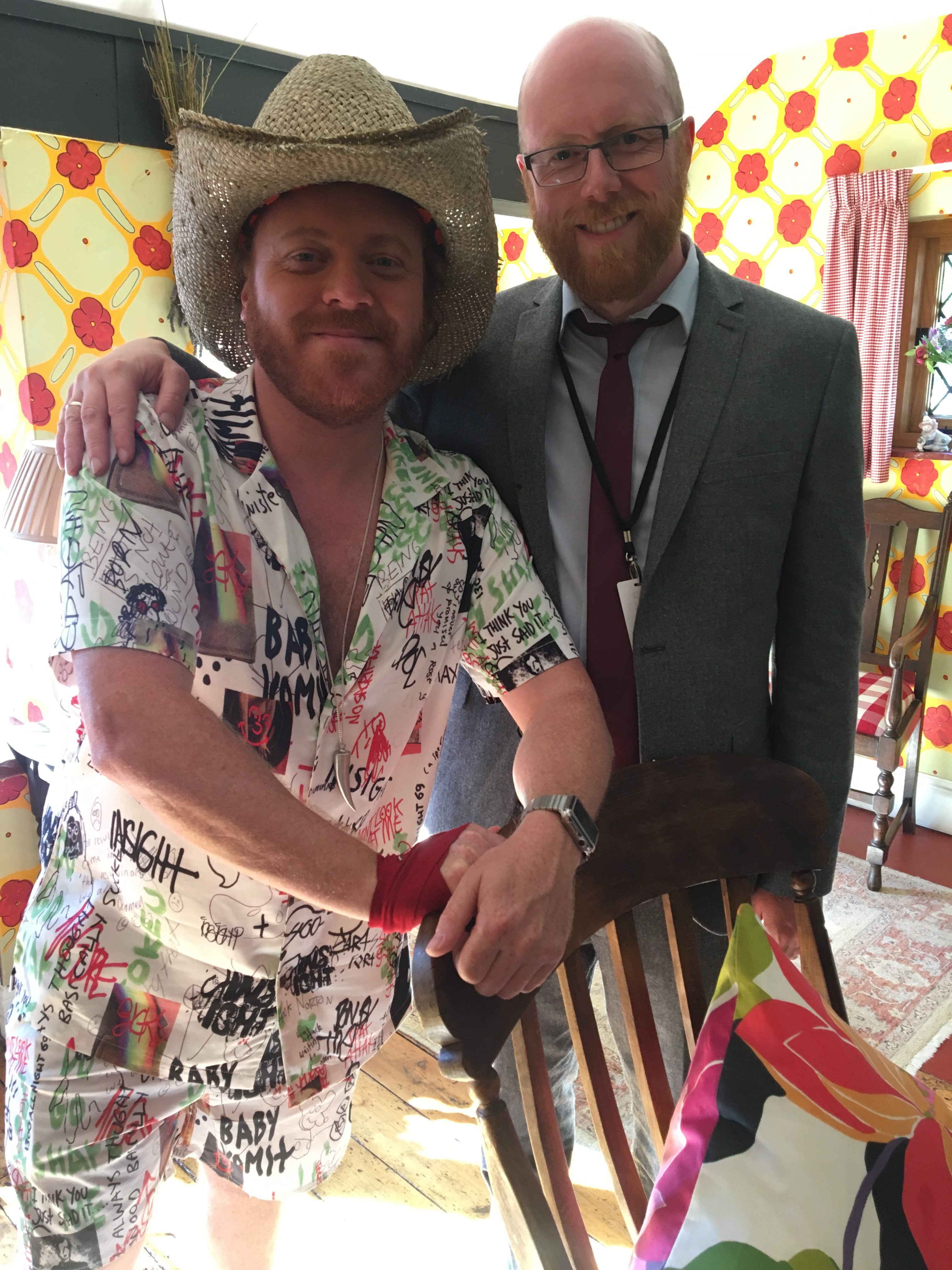 So that was a lot of fun! We shot that VT back in June. Really lovely to work with Keith/Leigh – he actually recognised me and we chatted about ginger beards and twitter abuse! Christopher Biggins was lovely too! You can watch the episode on ITV hub here. My bit is very near the beginning and I’m actually in it throughout that first VT (both parts). 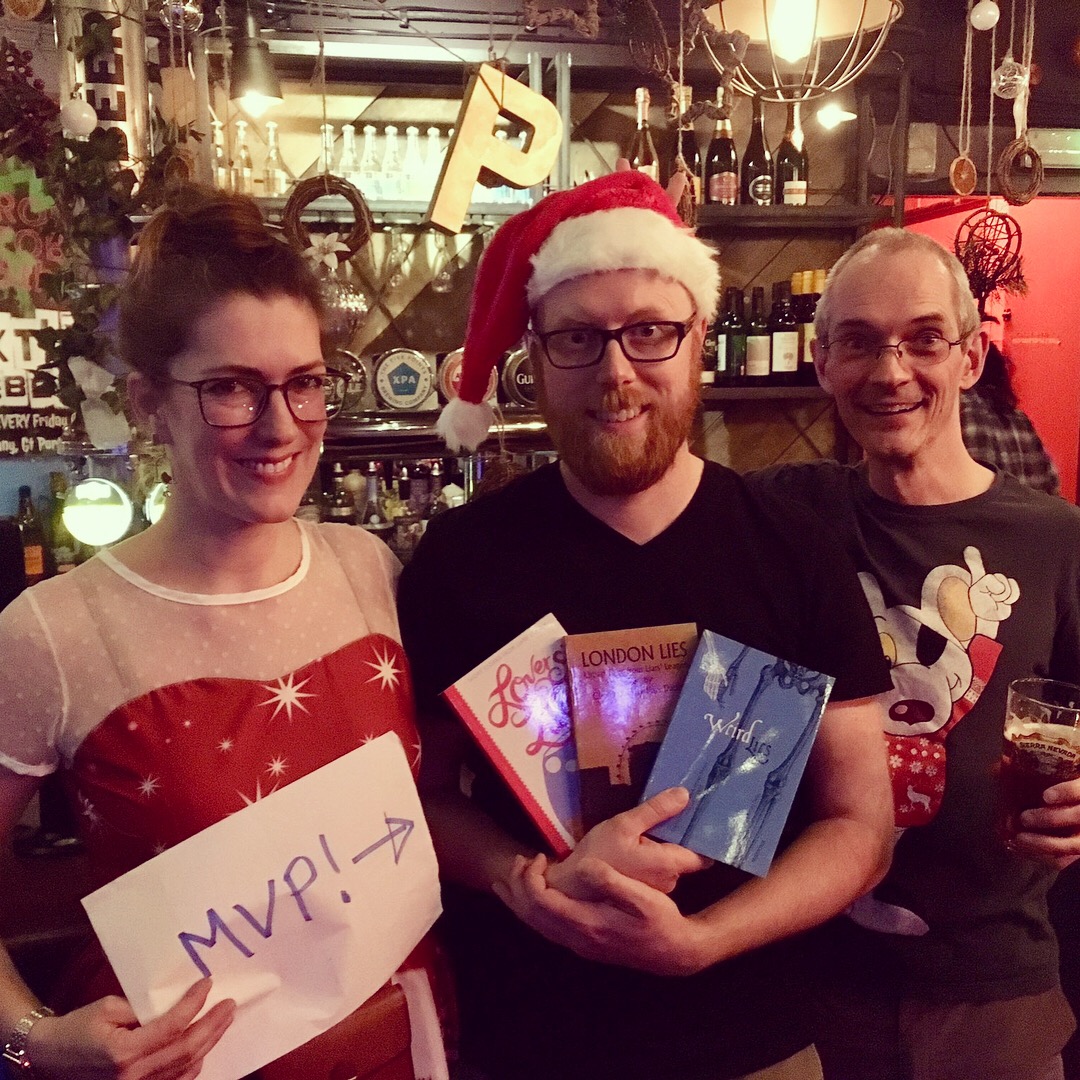 I actually bloody won an award! Most Valuable Player Acting Award 2018 at Liars’ League! Very happy about that. That’s Karty Darby and Liam Hogan with me and my prize!

So here’s something rather nice that we shot in the summer, written by TV writer James Farmer and directed by Stuart Laws for Turtle Canyon Comedy. I star as Rob with Sarah Dyas (recognisable from the Rich Keeble Vanity Project Xmas Special, naturally) as Beth. Also features Kat Sadler (who has the best line) and Owen Pullar. Enjoy!

Now I’ll be honest: I was dreading this. However, it wasn’t as bad as I remember it. After finishing a 5 hour voice session or something, doing an interview didn’t feel like the best thing to do, but here it is! It turned out OK! Some nice behind the scenes footage of the motion capture as well. Enjoy!